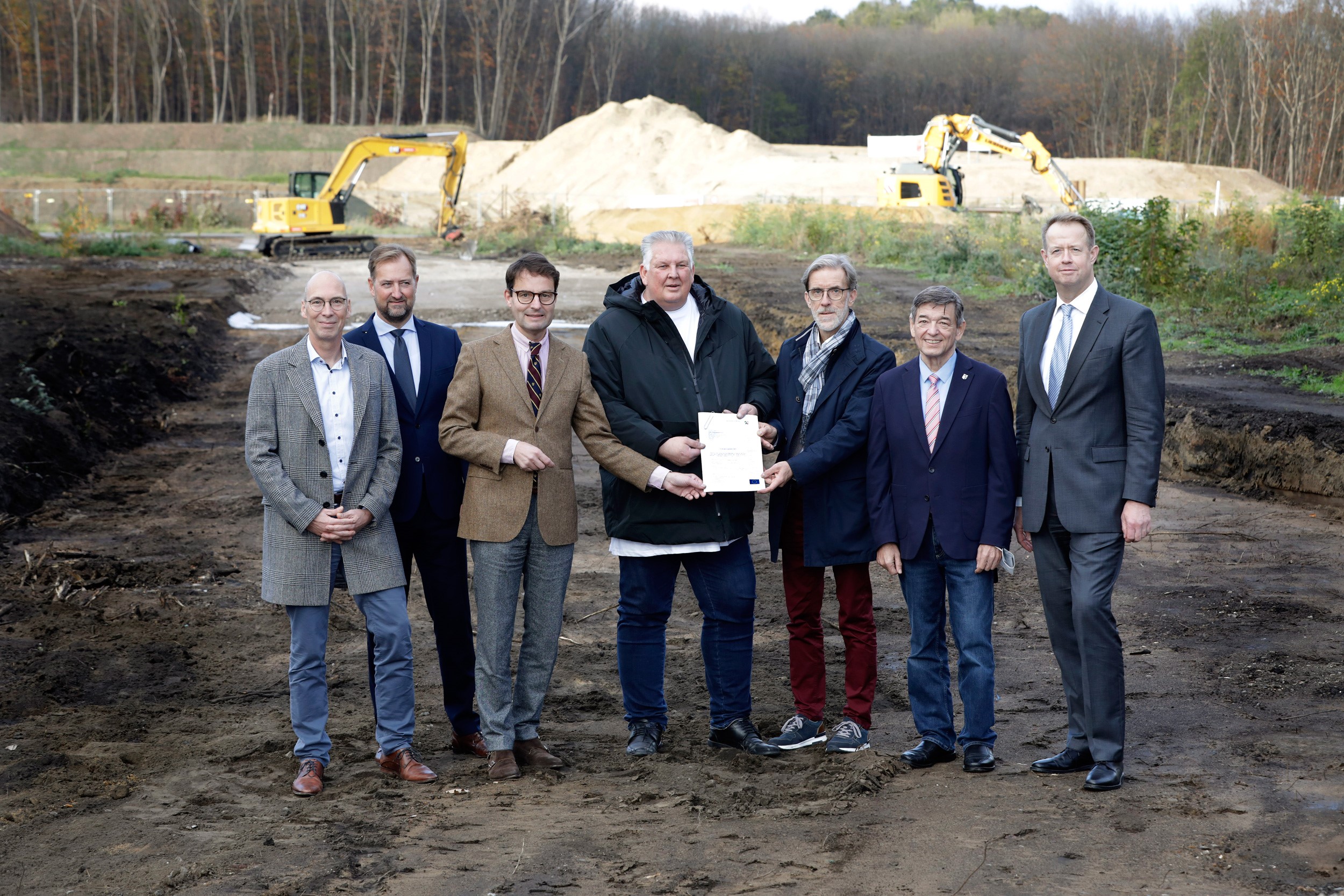 In total more than 70 million euros for gate.ruhr in Marl

The district government of Münster has now approved a total of more than 17 million euros in funding for gate.ruhr GmbH in an amendment notice. The exact amount is 17,123,643.92 euros, which will be used to support the development of the gate.ruhr industrial and commercial area on the site of the Auguste Victoria 3/7 mine in Marl, which was closed down in 2015.

District President Andreas Bothe handed over the funding notification to Michael Dinklage and Volker Duddek, both managing directors of gate.ruhr GmbH, on Friday, 4 November. Marl’s mayor Werner Arndt, Michael Kalthoff, chairman of the management board of RAG Montan Immobilien GmbH, as well as Andreas Täuber and Dr. Andreas Schützendübel, chairman and vice-chairman of the town planning committee, were also present at the handing over of the notice in Marl.

“This project is an investment in the future of the region, as it focuses on the economic development potential of the area. Not only Marl, but the entire Emscher-Lippe region will be able to benefit from gate.ruhr. Therefore, I am very pleased to be able to personally hand over this notification of the increase in funding today,” said Andreas Bothe.

“Gate.ruhr is the future project for Marl and the Emscher-Lippe region,” says Werner Arndt. “Up to 1,000 additional and urgently needed jobs and apprenticeships are to be created at the former Auguste Victoria 3/7 mine over the next few years.” The renewed high level of federal and state funding is enormously important “to open up new prospects for the future, especially for future generations.”

The goal of the gate.ruhr project is the development, preparation and marketing of commercially used areas with a size of about 12.5 hectares. It is intended to strengthen the adaptability, competitiveness and self-reliance of the region around the city of Marl, which is affected by structural change. This is intended to compensate for the loss of many jobs as one of the effects of the end of coal mining.

The site is also an attractive location for international companies, as it is closely connected to the motorway, rail and canal networks. The development measure is expected to attract new companies and thus create up to 1,000 new jobs and apprenticeships.

The total eligible expenditure amounts to 20,256,287.69 euros. The funding rate is 90 percent. The funds come from the Federal-Land Joint Task “Improvement of the Regional Economic Structure” (GRW) and are borne half by the Federal Government and half by the Land.