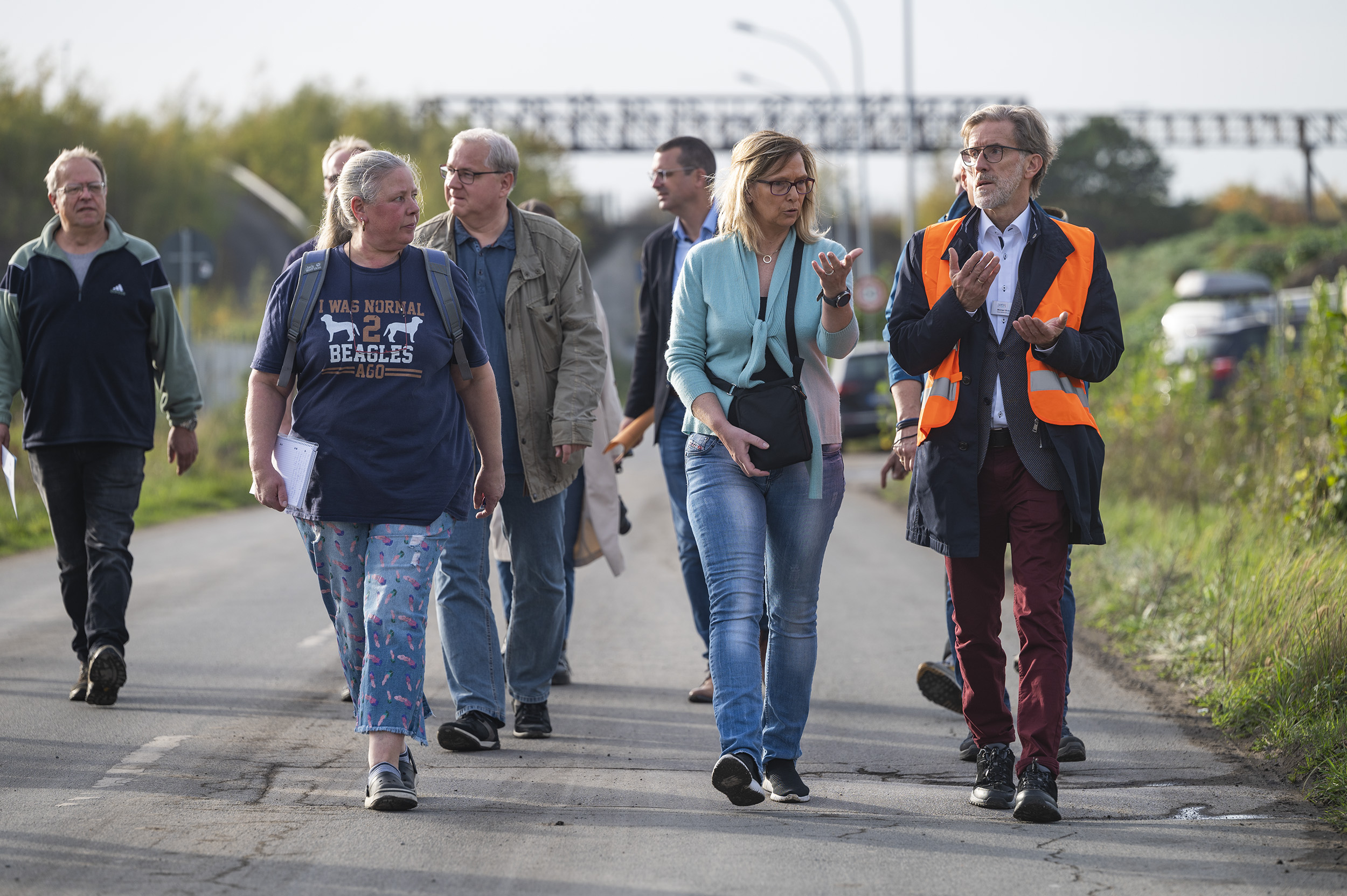 A look into the future of gate.ruhr

The gateway to the future has already opened wide – this is the impression many of the 90 or so citizens took away from a tour of the gate.ruhr construction site.

They were guided by the project managers of gate.ruhr GmbH, RAG Montan Immobilien GmbH and the city administration, who answered a wealth of questions at three stations. In the presence of Mayor Werner Arndt, the afternoon ended in late summer temperatures with a snack on the construction site. The response was positive: the guests welcomed the opportunity to talk to those responsible directly on the site at eye level and expressed their gratitude for the offer.

Focus on the entire site developement

The guided tour of the construction site focused on the entire development of the former Auguste Victoria 3/7 mine. It became clear that many citizens are not yet familiar with the two-stage development of the site: In the first project phase, the former power plant area and the northern mine area on Nordstraße are being developed by gate.ruhr GmbH for marketing from 2024. The areas to the south of the existing buildings, which are currently used by the city administration, are only planned for development after the RAG Group has completed the dismantling.

Preparation of the power site is in full swing

The interested citizens had met at the construction container on Nordstraße, where the preparation of the former power plant area is already in full swing. Since the start of construction in May, about 10 hectares have been prepared, so that the sheer size of the area is immediately apparent. gate.ruhr Managing Director Volker Duddek reported that the area is now being filled by about 2.5 metres – partly with soils obtained during the excavation of the new rainwater retention basins, so that additional lorry journeys can be saved. At the same time, gate.ruhr GmbH is examining together with the construction company Heitkamp whether further soil deliveries can be transported via the canal in the future. “That would be the best solution for the residents,” said one participant. Currently, an average of 40 trucks per day access the areas.

Another point of contact was the rainwater retention basin, where Georg Wiebringhaus, project coordinator and authorised signatory of gate.ruhr GmbH, presented the infrastructure measures – including the extension of Carl-Duisberg-Strasse into an avenue with cycle paths on both sides and two roundabouts. Important: All current infrastructure measures such as road construction, civil engineering and drainage are designed to anticipate the development of the entire area (development phases 1 and 2). Thus, all the necessary pipes, cables and fibre optics are already being laid in utility ducts along the road. “We are deliberately tackling this in one step so that construction work on Carl-Duisberg-Strasse is not required again in the second phase of the project,” said Mayor Werner Arndt.

Several questions were aimed at noise protection. For example, residents of the Zollvereinssiedlung reported that noise pollution from the nearby motorway and the chemical park was already high. Those responsible for the demolition promised to preserve the existing noise barrier as far as possible and to examine a later extension in the south of the mining area.

Interest in the energy concept

Many participants were also interested in the energy concept: “A big advantage is that we can offer future users district heating, gas and even hydrogen – everything is available,” explained Volker Duddek. Mayor Werner Arndt added: “We are planning a very clean, very innovative industrial area here. Today, that also means that the companies will base their energy supply to a large extent on renewable sources – from solar energy on the roof to heat pumps and rainwater utilisation.”

View of the second developement phase

On a hill overlooking the southern areas still under mining law, Robert Bures and Thomas Middelmann from RAG Montan Immobilien GmbH explained the status of the deconstruction work: Within the framework of the final operating plan procedure (ABP), mining here has the obligation to restore all areas to their original condition and make them suitable for use. Only then will the areas be released from mining supervision and can be put to a new use through a separate urban land use planning procedure. Then the citizens will again be able to contribute their ideas within the framework of the early public participation for the preparation of the development plan. The basic principle is that the southern areas are intended for small-scale commercial settlements such as crafts and manufacturing with low emissions.

On the site of the former Auguste Victoria 3/7 mine, the city of Marl and RAG Montan Immobilien GmbH, the developer of mining sites, want to attract innovative companies. Up to 1,000 additional jobs and apprenticeships are to be created there in the next few years, opening up new prospects for the future, especially for future generations. “Thousands of industrial jobs have been lost due to the end of mining in Marl,” says Marl’s economic development manager Dr Manfred Gehrke. “If young families are to live, work and shop in Marl, then we urgently need new jobs.”